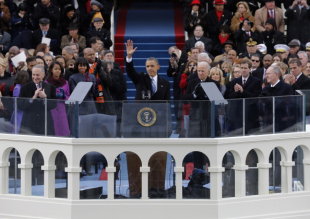 ' I come to bury Obama, not to praise him'

This is how Shakespeare would have begun this article.. Indeed a lot of criticism continues to trail President Obama's Inauguration Speech, especially from the conservative right and in fact from all over Conservative America. 'Its an ode to big government'; 'this is a resurgence of activist government',;'how more liberal will Obama get', and many more of such statements rent the airwaves just hours after the inaugural ceremony.

This is all because of the President's commitment to Medicare, Medicaid and Social Security, and other such welfarist programs that tend to earn him the label 'socialist'.

Oh how citizens in Third World Countries would love to exchange their lack-lustre leaders with a President Obama.  Here the leaders are detached from the socio-economic realities afflicting the average citizens of their domains.

In those countries graciously given the title 'Developing Countries' by the Western World, we would give two arms and ten teeth to have the opportunity to be governed by such a 'welfarist' or 'socialist' president. Here, we have had 'odes to big government' for decades, (and the musicians keep changing every couple of years) without improvement in the quality of lives of citizens .

Conservative America should be careful what they wish for. They just might conjure up Third World style leaders who are big on talk, big on budgets and lightweight on the primary responsibilities of government - rule of law, security of lives and property, and promotion of general welfare of its constituents.
Posted by Unknown at 11:49 AM